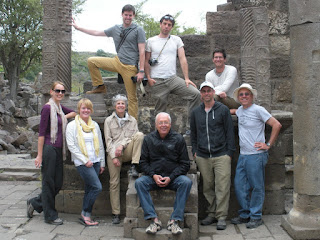 So what does an archaeological numismatist do when the excavation he is working with does not find many coins? Sepphoris 2011 found lots of interesting information but only around 8 coins give or take. That was fewer than one a day, and except for one that was so corroded there was no chance to identify it, I was able to put tentative identifications on each of them rather quickly. (One cannot give full attributions until the coins are cleaned. Unlike coins that are found on beaches or on the surface of the ground, coins from excavations are usually heavily encrusted, and often cannot even be easily recognized as coins. Luckily all of our Sepphoris gang had very sharp eyes, and combined with the advance warnings of the metal detector, I do not think we let any escape.)

With so few coins to examine, I had lots of free time to help out in other areas of the excavation.  Since I am a bit old to remain bent over digging and sweeping for 3 or 4 consecutive hours, I did not do much of that, though I did spend some time cleaning up areas of dirt where the ground was too dirty to excavate or to be seen properly in photos or drawings. But the main jobs I undertook were carrying dirt and sifting dirt. Most of the excavated dirt was sifted, but some of it was simply dumped.

When we began the excavation our leaders carefully selected a dump site. Did you know that esthetics is an important consideration for good field archaeologists? Not only do they want to make sure that excavations are thorough, well- organized, and properly recorded. They also want to be certain that the selected areas are excavated in such a way as to leave them as pleasing as possible to look at in years to come. Finally, all of the dirt that is removed must be relocated to the most innocuous possible dump site, that is carefully marked on plans so some unsuspecting archaeologist does not spend days or weeks re-excavating it in the future (an unfortunate event I am assured has occurred more than once).

The dump site chosen on the first day of our excavation was a previously excavated area where nothing of significance had been found; it was right on the edge of the western acropolis where we were digging, so it would not become an eyesore. We began with a square, previously excavated pit that was about 10 by 12 feet and around 6 feet deep. It contained a few stones, and tree branches, but it was mostly empty. When we began dumping our junk and our sifted waste in this spot, it never occurred to me that we might fill it even half way. Day by day, however, the dump pit began to be filled, and by our last day it had not only been filled to the brim, but we had smoothed it over approximately 2 feet ABOVE ground level. I suspect that this will settle considerably in the next rainy season. In the meantime, my limited ability with higher mathematics has allowed me to calculate that our little group moved around 960 cubic feet of dirt and stones (about 36 cubic yards) in just under two weeks of six-hour work days. I learned by way of Google that a cubic yard of gravel/dirt weighs around 2,400 pounds, so our little group has, in order to further the understanding of ancient Sepphoris, moved a bit more than 86,000 pounds (40+ tons!) of dirt and rocks. This is roughly the equivalent of 12-13 small dump truck loads of dirt. Because the site was not a flat surface, we could not use a wheelbarrow except as something over which to sift dirt. So all of the large stones were carried by hand, and smaller rocks and dirt were carried in 10 liter buckets. (In fact our complete group moved considerably more earth, perhaps 50 percent more, because Milton and Byron operated in a lower area, with different dumps, and moved a great deal of dirt as well!)

Keep in mind that ours was a limited excavation, with modest excavation goals. Imagine how much dirt might be moved over a 4-5 week period with more than a hundred participants.

This is the last entry in the Sepphoris 2011 blog, although I will continue to use this blogspot to post some regular articles and commentary related to archaeology and ancient coins of the Holy Land.