This is such a cool way to communicate. Thanks for setting it up, Ben.

Another day of nice weather at Sepphoris. The archaeology was a bunch of measuring and moving stones, digging, and sifting. The most exciting event was discovery of a pretty ugly Ottoman period coin, once used in jewelry, which was found in an area of quite late fill.

We did a lot of preparation work for opening some new probes tomorrow and we will see what that will bring. Today also the Israeli TV station Channel 1 came and did a big feature story on Eric and Carol Meyers and their work here at Sepphoris. One never knows if some of us worker bees might show up in background shots.

An interesting note I forgot the other day....at one point we were excavating a room that had an oven, and was surely a kitchen or food preparation area. We found many bones in a corner, and there is no doubt that we found bones of sheep/goats, chickens or other small birds, and also fish. the very next day we were finishing a corner of the same room and among other small bones we found two jaw bones (with teeth) of small rodents. One hopes that the rodents were eating the garbage and not that the people of Sepphoris were eating the rodents....I think it is a safe
assumption!

One of the fascinating aspects of Beit Shean, which indeed is an entire city of many acres, is the 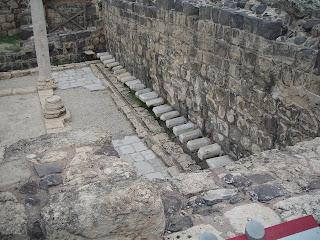 public toilet, which has toilet seats wall to wall on three sides of the room. they are not se
parated, and apparently were used by men and women simultaneously. A running water system ran under the toilets and washed
away the waste. It was quite nice sanitation for 1900 years ago.....