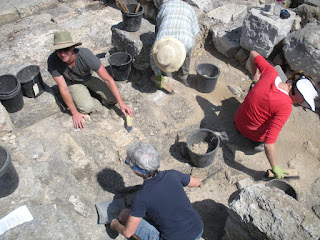 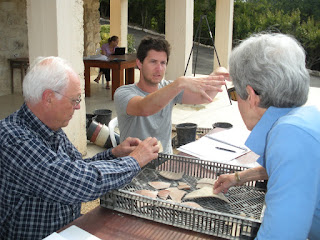 The beginning of our second and final week of this brief Sepphoris excavation was not very eventful in the field, although we moved a heck of a lot of dirt. My guess is that we removed and sifted around 100 buckets of dirt, maybe a few more.

Principal work this season is to better identify the chronology of certain areas in the ancient city where Eric and Carol Meyers have been excavating with their students since 1993. (They have excavated at Sepphoris since 1985 in other areas, and in fact in 1986/7 discovered the famous Dionysus mosaic with the lovely face that the media dubbed the "Mona Lisa of the Galilee," which is on display here at the site…her face at the very top of this blog site.) In order to do this the senior archaeologists have identified areas for probes and these are the specific areas that are being dug.

The Rabbis who wrote the Talmud described the air of Sepphoris as "salubrious" and that certainly was true today. Although we had some real heat, probably around 85 F around noon, by the mid-afternoon when we left the site, we were starting to get a lovely breeze.

We reconvened at 4 pm for pottery reading. This is one of my favorite parts of the excavation, and here is how it works. The excavation is divided into areas. Each area is divided into "loci" (singular = locus) that are unique three dimensional areas that are physically independent from other areas. Sometimes the separation is due to a plaster floor, a wall, a collapse layer, a fill layer, or even an ash layer from a fire long ago. Although the earliest occupation of Sepphoris is still a shrouded in mystery, the pottery shards indicate that there was occupation at this site certainly in the early Iron Age (circa 900) BCE and through the Persian Period (4th century BCE). The housing units here range from the Hellenistic through the Roman Periods, and during this time Sepphoris was certainly a Jewish town. (Bones of fish, poultry, and sheep/goats have been found in these areas but no bones of swine. Also a number of Jewish inscriptions and menorah images have been found here.) In the 2 century CE the Mishnah was compiled and edited here by Rabbi Yehudah ha Nasi, and in the 3 – 4 centuries much of the Talmud was compiled and edited at Sepphoris. The Jewish nature of the city seems to have ended at the time of an earthquake of 363 CE, of which we see evidence everywhere at the site, with buildings damaged severely in many cases.

As each locus is excavated (see photo above of 4 colleagues working on one locus), the dirt that is removed is sifted (much of it by this grimy scribe). During the sifting process we remove identifiable shards of pottery, artifacts, coins, and even animal bones. The pottery goes into a bucket that is labeled to the number of the locus, and the coins, bones, and other artifacts go into specially labeled plastic bags. Each day we bring the pottery buckets back to our camp, and the pottery is immersed in water, and scrubbed with fingernail brushes to remove all dirt that adheres to it. The shards are then dried in the sun.

Every few days the ceramics expert, in our case it is Eric Meyers, who has more than 40 years of experience "reading" and identifying shards, sits at a large table overlooking the gorgeous view of the Galilee, and the pottery from each locus is dumped on the table (see photo above). The graduate student/archaeologist responsible for the locus sits alongside him and we help spread out the pottery fragments. The most valuable pottery fragments for identification are those that contain rims and lips of pottery, since the body "shards" are often too similar to identify. Eric quickly picks out the identifiable fragments….today we had quite a few Iron Age fragments; two interesting large pieces of "Attic" black-glazed pottery, one with painted floral motif; lots of Hellenistic, Early Roman, Middle Roman, Late Roman and Byzantine, as well as later Islamic fragments which went as late as the 8-9th centuries CE.

Since today was the first day we did not find a single coin in the field (although the metal detector warned us that this would likely be the case), the pottery reading was fascinating as always, and it was especially neat to find the Iron Age and Attic ware pottery here. We also found a fragment of an unusual oil lamp, probably 2 – 3 century Roman, but of an exact type not familiar us. We are gathering other opinions.

We also had a bit of excitement…during the pottery reading one of the Ph.D. students, Alan Todd (sitting with Eric in photo of pottery reading), was working at his computer. Suddenly he jumped up and shouted, and we realized that a snake had somehow crawled into his lap and, needless to say, startled him. Said snake wound his way across the patio in and out of bins of pottery shards drying in the sun….with people jumping out of its way. Another of the Ph.D. students, macho Sean Buras, picked it up by the tail and threw it into the garden. Yes, that is what counted as big excitement today in Sepphoris!