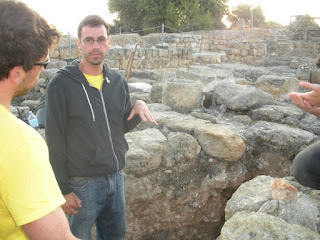 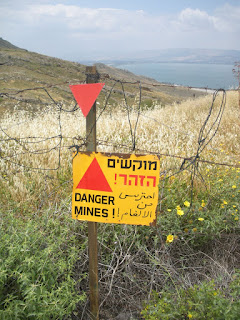 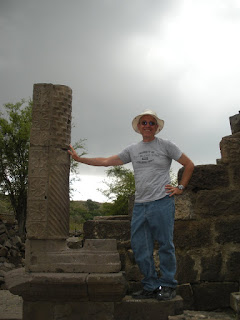 It's now Sunday evening and today was our day off. I drove to Tel Aviv to visit old friends and met my brother Ron and his wife Terry for lunch. Now, back at Zippori Village I learn that 8 of my 12 colleagues are down with colds, flu, or food poisoning.  Hope they will be fine tomorrow, because only a week remaining for this excavation, and quite a bit to do.

It's been a couple of days since I wrote, so here's a report on Friday and Saturday. Friday's excavation work was mostly uneventful because we had storms on and off through the morning, which even included pellet-sized hail for a few minutes. The rain came and went and in general was not wet enough to disrupt the work, but the icy wind whipping across the hill combined with the thunder and lightning meant that we were going to be safer indoors during those periods. So we got to the nearest shelter which was the mostly Crusader fortress on the crown of Sepphoris.

The areas we dug on Friday before the lightning chased us away were mostly late Roman from the fourth century, as proven by a small bronze coin of Constantius II (Roman Emperor from 337 to 361— second son of Constantine I and Fausta), proudly discovered by Elizabeth while she was excavating. Usually coins are found in the sifting process and it takes a sharp eye indeed to find a small (15 mm) bronze coin during digging. Elizabeth is a graduate student in art history, so she was up to the task.

Friday evening I was invited to Shabbat dinner at the home of my long-time friend and excellent numismatist Ronen Bachar, who lives in Beit Shean, about an hour from here. It was an easy drive thanks to the clever GPS I am using. Ronen's wife Miri cooked course after course of fish, chicken, and maybe a dozen side dishes. Their five lovely daughters, who range from around 6 to 17 joined us and it was a great Israeli Shabbat.

Saturday was a travel day for our group and 10 of us headed to the Golan Heights by way of the Sea of Galilee to explore some familiar spots and some that I had never seen before. It is always amazing to visit these historic spots, but to travel in a car with Eric and Carol Meyers and benefit from their commentary, as well as the fantastic knowledge of the graduate students, is a wonderful experience. The senior graduate student and excavation supervisor Ben Gordon (first photo) has years of excavation experience here in Israel and has a broad and deep knowledge of the sites.

Near the Sea of Galilee we visited the ancient synagogue and church at Capernaum and the reconstructed ancient church at Tabgha. Capernaum was a village on the northern shore of the water, and excavations have found two ancient synagogues, one on top of the other, dating to the third to fifth centuries CE. An octagonal house dated to the first century CE is traditionally said to be the home of St. Peter, and a modern church is built atop it.

Nearby Tabgha is the site of the Church of the Multiplication, where it is believed that Jesus provided food for 5,000 people with five loaves of bread and two fish. A 4 – 5 century Church was excavated and reconstructed here, with the original mosaic floor. The principal feature of this floor is a mosaic of two fish and a loaf of bread. This portion of the mosaic was built adjacent to a jutting large stone, and some believe that the builders of this church believed that this was the rock upon which Jesus stood when he blessed the food just before feeding the crowd which gathered to hear him speak.

Hippos, also called Sussita, is a site perched high on a hill overlooking the Sea of Galilee. It was formerly Syrian territory until 1967, and there are still old signs warning against walking into the minefields strung around the place (second photo). This rainy season has brought out amazingly beautiful wildflowers in dozens of colors, and the hills are beautiful. It was about a 40 minute climb up to the city at Hippos, which was a part of the Decapolis, a league of ten Greek cities in this area in Roman times.  There are wonderful ruins here of several churches from the Byzantine period, and two of them still have their reliquary areas where relics of saints would have been stored.

I had never been to Umm el Qanatir which is an amazing synagogue from the Talmudic period—from around the 4 – 6 centuries CE. The synagogue is being simultaneously excavated and carefully restored in a high-tech excavation in which I was told that the archaeologists are using a laser to scan the ruins. Then specially created software creates three dimensional computer images, and each stone is implanted with a microchip so each of traits, including original placement can be determined. A huge crane lifts the black basalt stones in place. It is estimated that the original walls of this synagogue were more than five meters (at least 30 feet) high. The synagogue has a platform ("bima") for prayer and a torah shrine which is flanked by carvings of Jewish menorahs flanked by incense shovels, lulavs and etrogs (third photo). It is believed that the people who lived in the nearby city processed linen, a very prosperous business in the ancient world according to the Talmud.

Tomorrow, back to the dirt.