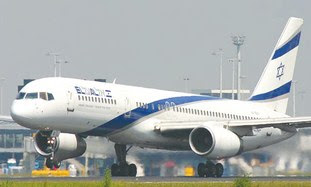 A US-bound El Al Boeing 777 with some 270 passengers on board was forced to make an emergency landing Monday morning at Ben- Gurion Airport after a problem was found with one of its landing gear.

A pilot on El Al flight 027 to Newark, New Jersey, noticed that one of the left main wheels had become jammed after takeoff late Sunday night. A state of emergency was declared at the airport due to concerns the plane would experience difficulties while landing.

A state of emergency was announced at the airport overnight Sunday due to fears that the plane would experience difficulties during the landing.

After the 777 circled above the Mediterranean for three hours waiting for daybreak, the pilot jettisoned fuel to avoid a possible fire upon landing.

Israel Air Force jets were deployed to examine the aircraft up close and help determine the problem, but also to ensure that it was not security- related.

Over 70 Magen David Adom rescue teams as well as police and fire crews were brought out, but the landing was accomplished without complications.
http://www.jpost.com/NationalNews/Article.aspx?id=221770