The Coin in the Fish’s Mouth

Jesus, as a practicing Jew, was aware of his annual financial obligation to the Jerusalem Temple. This annual tribute is nicely illustrated in the parable of the coin in the fish’s mouth.
Each year, Jewish officials requested that the annual Temple contribution at the beginning of the Hebrew month of Adar, preceding Passover. On the fifteenth day of Adar, tables of the money changers were set up through the Holy Land to receive these contributions. Talmudic traditions mention various cities in Galilee where lists of those who had given were gathered and transferred to Jerusalem.
After 10 days, on the twenty-fifth of Adar, the money-changers terminated their local collections and continued their operations only in the immediate area of the Jerusalem Temple.
Virtually all Jews, including those who had expressed reservations about the current state of the Temple and its system of sacrifices, also sent their contributions to the Temple. Matthew 17:24-27 (NIV) tells the story of how Jesus and his disciples were solicited and gave their contribution to the collectors of the Temple tribute:

24 After Jesus and his disciples arrived in Capernaum, the collectors of the two-drachma temple tax came to Peter and asked, “Doesn’t your teacher pay the temple tax?”
25 “Yes, he does,” he replied.
When Peter came into the house, Jesus was the first to speak. “What do you think, Simon?” he asked. “From whom do the kings of the earth collect duty and taxes—from their own children or from others?”
26 “From others,” Peter answered.
“Then the children are exempt,” Jesus said to him. 27 “But so that we may not cause offense, go to the lake and throw out your line. Take the first fish you catch; open its mouth and you will find a four-drachma coin. Take it and give it to them for my tax and yours.”
This story of the coin in the fish’s mouth is never verified beyond this telling—in other words, we don’t know if this is a true story, partially true, based on a legend, or a parable intended to otherwise enlighten readers. If a coin really was found in a fish’s mouth, however, it seems clear from Matthew’s report that it would have been a shekel of Tyre since that was the singular coin accepted as payment of the annual half-shekel Temple tribute for both Jesus and for Peter the fisherman.

Shekels and half-shekels of Tyre (together with fewer Seleucid tetradrachms and didrachms often struck in Tyre, Sidon, or Antioch) were certainly the most commonly circulated silver coins in the ancient Holy Land from the first century BC to the time of the Jewish War Against Rome, which ended in 70 AD. 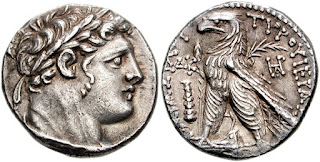 Tyre shekel struck 103/102 BC at Tyre. The obverse depicts the god Melquart, a Tyrian version of Herakles, and the reverse depicts an eagle with a club to left, the club is a mintmark of Tyre. The reverse inscription, in Greek, contains the date, and proclaims, “[money of] Tyre, the Holy and Inviolable.” (photo courtesy cngcoins.com)

It is also known, as discussed above, that during this period, the Tyre silver shekels and half-shekels were the only coins accepted as payment of the annual tribute to the Jerusalem Temple of one half shekel per Jewish adult male.
Ya’akov Meshorer theorizes that there were two basic issues of Tyrian silver coins. The first issue was struck in Tyre from 126/5 BC until 19/18 BC and the second issue was struck in or near Jerusalem, from 18/17 BC until 79/60 AD. This is possible, though other numismatists have argued that the second issue, which is cruder in style and manufacture than the first, may not have been minted at Tyre, but was probably minted somewhere other than Jerusalem.

Whether struck in Tyre or farther south, it is clear that the silver coins of ancient Tyre were well known in the ancient world for their weight and quality of silver.  The Talmud makes it a point to explain that “Silver, whenever mentioned in the Pentateuch, is Tyrian silver.” (Tosephta Kethuboth 13,20)


Because of this quotation, backed up by the obviously large quantity of the coins originally minted, it is quite clear that many New Testament stories, such as the coin in the fish’s mouth mentioned above, the 30 pieces of silver paid to Judas for his betrayal of Jesus (Matthew 26: 14-15), and the large silver coins used to bribe the soldiers who had fled from their watch at the Holy Sepulcher on Easter morning (Matthew 28:11) each most likely involved the shekels and the half-shekels of Tyre.
Posted by David Hendin at 10:38 PM