There was a significant “Third Revolt” of the Jews during the reign of the emperor Trajan (98-117 AD).  This war took place between the Jewish War (First Revolt—66-70 AD) and the Bar Kokhba War (Second Revolt—132-135 AD).
It was called “the war of Quietus” and took place between the years 115 and 117 AD.  It was fought in Cyrenaica, Cyprus, Egypt, and Mesopotamia, but apparently not in Judaea.
More accurately, the “war of Quietus” was a series of revolts.  These revolts were likely the direct results of both the aftermath of the reign of Domitian (who was especially hard on Christians and Jews) as well as attacks under Trajan’s rule on both Christian and Jewish leaders.

We do not know a great deal about the “war of Quietus,” and one reason is that there is not any known numismatic material that references this war.  By comparison, the numismatic evidence from the First Revolt consists of both the coins of the Jews of the period, as well as the JUDAEA CAPTA coins of the Flavians, which reflect a great deal on their view of Rome’s victory.
Bar Kokhba’s coins are likewise very important to our knowledge of the so-called Second Revolt.  Indeed, the first name of Bar Kokhba, “Simon” was known ONLY from his coins until forty years ago—1960 to be exact—when the Bar Kokhba letters, discovered in caves near the Dead Sea, were discovered and translated.

Bar Kokhba bronze coin with the name of Simon. (Image © by David Hendin)

After Domitian’s harsh rule, his successor, Nerva, was less abusive to his subjects.
There is no doubt that at this time in history there was quite a lot of animosity against the Jews.  If you don’t believe it, read the very anti-Jewish first-century historian Tacitus, who in small part stated: “The other practices of the Jews are sinister and revolting, and have entrenched themselves by their very wickedness.”
Early in the second century, under Trajan’s rule, the head of the Judaeo-Christian Church, Simeon, son of Cleophas, was executed by the Roman governor of Judaea.
Furthermore, Ignatius, bishop of Antioch, a leading gentile Christian, was sent to Rome and executed about the year 110.  Grant describes him as “the first significant Christian churchman.”  (At this point in the history of Christianity there were both Jewish Christians and Gentile Christians.  Originally Christianity was an offshoot of Judaism, thus the earliest Christians needed first to be Jews.  Later, as Paul spread the gospel throughout the world, he preached that non-Jews could convert directly to Christianity without becoming Jewish first.)
The reasons for these executions are not clear, but they are probably part of a religious persecution by that also underscored the Jewish unrest.
In 110, Trajan moved against , thus ending a 50-year peace that Nero had established.  The Parthians had been weakened by the new and powerful Kushan kingdom in eastern .  A few years later, Trajan also annexed , and moved his armies into upper and Adiabene.  Adiabene is a country of special interest, since its ruling dynasty (led by Queen Helena) had voluntary converted to Judaism in the first century.  (Helena’s tomb stands today in East Jerusalem, it is known as the “Tomb of the Kings…a blog on Queen Helena of Adiabene at a later date.)
During these various military operations, a large number of Jewish communities came under Trajan’s control.
The first uprising came in , where a Jewish king named Lukuas (also called Andrew) violently attacked the local Greek governments and Roman provincial authorities—all of whom had been weakened in favor of Trajan’s Parthian campaigns.   Cassius Dio painted a grim picture of Jewish atrocities, culminating with the Jews forcing the Romans and Greeks to fight with wild animals, or as gladiators in the arena.  This sounds almost as if the Jews were exacting revenge for similar fates suffered by so many Jewish captives in some 45 years earlier after the First Revolt.
The outbreak had meanwhile spread to Cyprus, and Eusebius, the “father of church history” reports its capital Salamis was laid waste by them.  There is no information about how the revolt was ended, but we know of the consequence, Cassius Dio reports that from that time forward Jews were not allowed to appear on the island, under penalty of death.  Violent fighting also followed in and the synagogue of , said to be a marvel of Egyptian architecture, was destroyed.  To quell these Jewish outbreaks, Trajan’s first move was to call in a general named Martius Turbo.  By repeated onslaughts against the Jews he overcame the rebellions in , , and .
To oppose the Jews closer to his own army, in the district of the , Trajan turned to his favorite general, Lucius Quietus, a Moorish prince, known for his unpleasant disposition.
Emil Shurer writes in The Jewish People in the Time of Jesus Christ that “with barbarous cruelty Quietus executed his commission and laid waste to the mostly Jewish towns of Nisibis and Edessa. Thousands of Jews were put to death. Thus was order restored, and Quietus, in recognition of his services, was appointed governor of .”
Even though accounts of the “war of Quietus” are skimpy, some sources say that as many as half a million casualties occurred amongst the foes.
Apparently as a reward for his good work, in about 117 AD Trajan sent Quietus to Judaea as governor of Palestine with unlimited power.  This seems to indicate that there was also a certain level of Jewish rebellion in Palestine.  However, the main Jewish insurrections at this time were clearly outside of .  On the other hand, it is quite probable that the Jewish restiveness in Judaea at the time was the precursor to the Bar Kokhba War which erupted only 14 years later in 131/132 AD.
Possibly partly because of the Jewish uprisings, Trajan was finally unsuccessful in his Parthian campaign and he eventually had to give up on his grandiose plan to turn into a Roman province.  At this time Trajan became very sick.  He was taken to , and died a few months later in .  His wife, Plotina, told the army that before his death Trajan had named Hadrian as his adopted son and successor.
When Hadrian became emperor, he removed Quietus from this post, probably because the Moorish General had favored Trajan’s expansionism, which was not Hadrian’s style.  Quietus was executed in the following year, accused of participating in a conspiracy against the emperor.
I discussed the “war of Quietus” with Rabbi Benjamin Yablok, a numismatist and Talmudic scholar.  He pointed out that the “war of Quietus” had at least one interesting, long lasting effect on Jewish tradition.  Based on writings in the Talmud, Rabbi Yablok explains, when Jewish women were married they would wear golden tiaras or crowns to the ceremony.  But, “in commemoration of the misfortunes caused by Lucius Quietus, the Rabbinical sages decreed that brides should no longer wear crowns.”  Jewish women have not worn golden marriage crowns since that time. 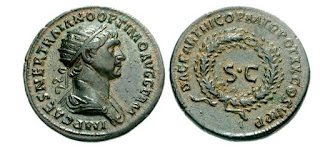 There is no numismatic evidence of the Jewish War of Quietus, 115-117 AD.  However, this eastern issue semis of Trajan gives him the title PARTHICO “The Parthian” which refers to his early success against the Parthians during this period.  The Jewish Talmud refers to this denomination as a “mismis.” (Image courtesy cngcoins.com)